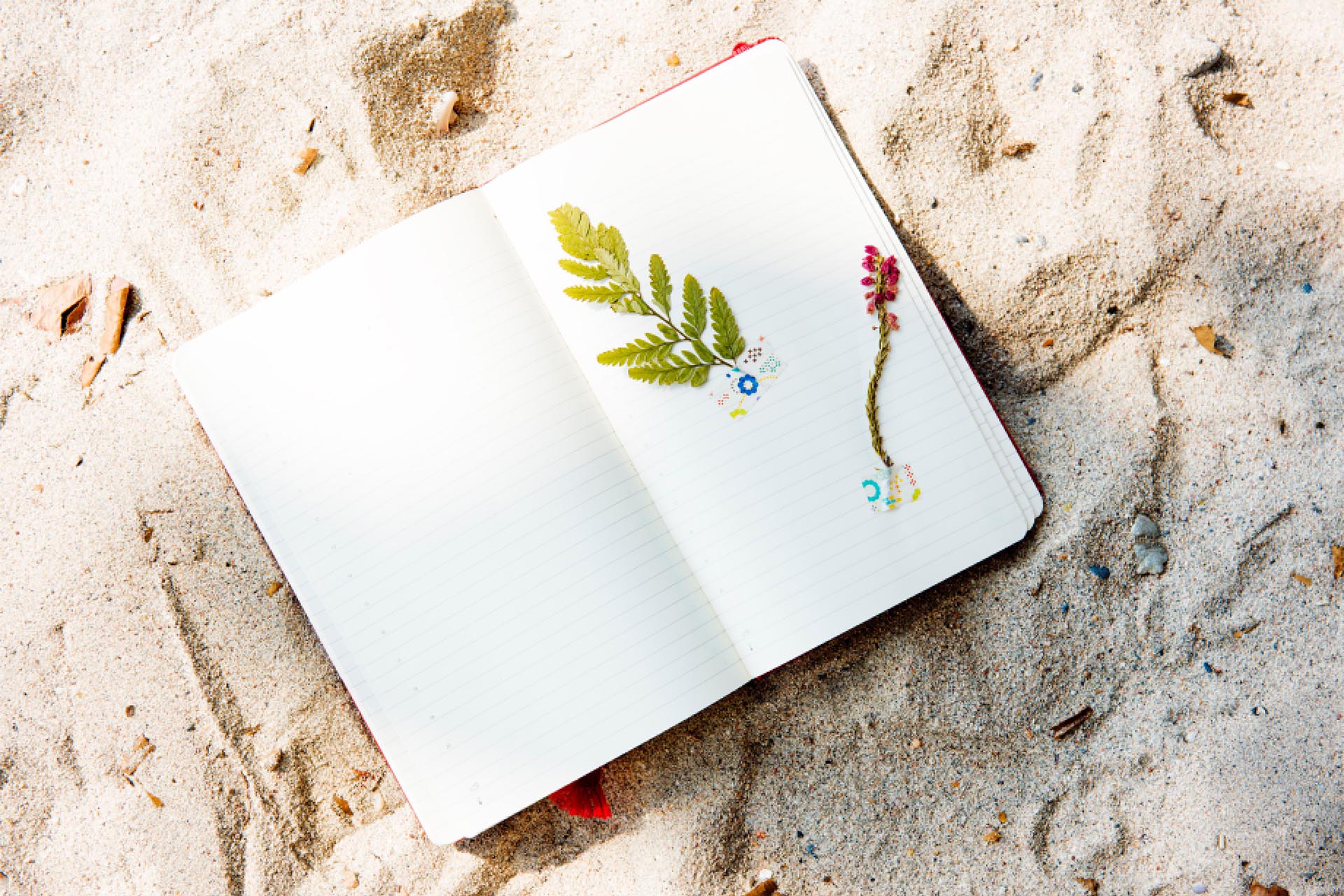 We’ve officially been travelling for 13 days now and have packed a lot in. Our days have been fast-paced, even on island time and without having plans in advance. We’ve kept busy trying to see and do everything that people have suggested, but we’re not sure if we can maintain this pace for six months.

We wanted to keep things real with you all and share both our highlights and not-so-highlights from our trip so far.

– It turns out Dom loves to snorkel. He had never been to an island before Hawaii, and we didn’t do any snorkeling when we were in Costa Rica, so this was a first for him. One thing you should also know about Dominic is that he had a saltwater fish tank growing up and he has always had a love for ocean fish. So you can imagine that seeing them first-hand in their natural habitat along with SO many sea turtles was like Christmas morning for him. I honestly thought I had officially lost him to the ocean.

– We’ve also discovered that Dom loves poke bowls and sushi (which is a big surprise since he didn’t really eat much fish before we left for Hawaii). The fish here has been so fresh (obviously) so I think that’s what finally made him a convert. Nothing against Toronto sushi, but it just can’t possibly compete with the freshness of fish that’s been caught the same day, down the street from where you’re eating it. 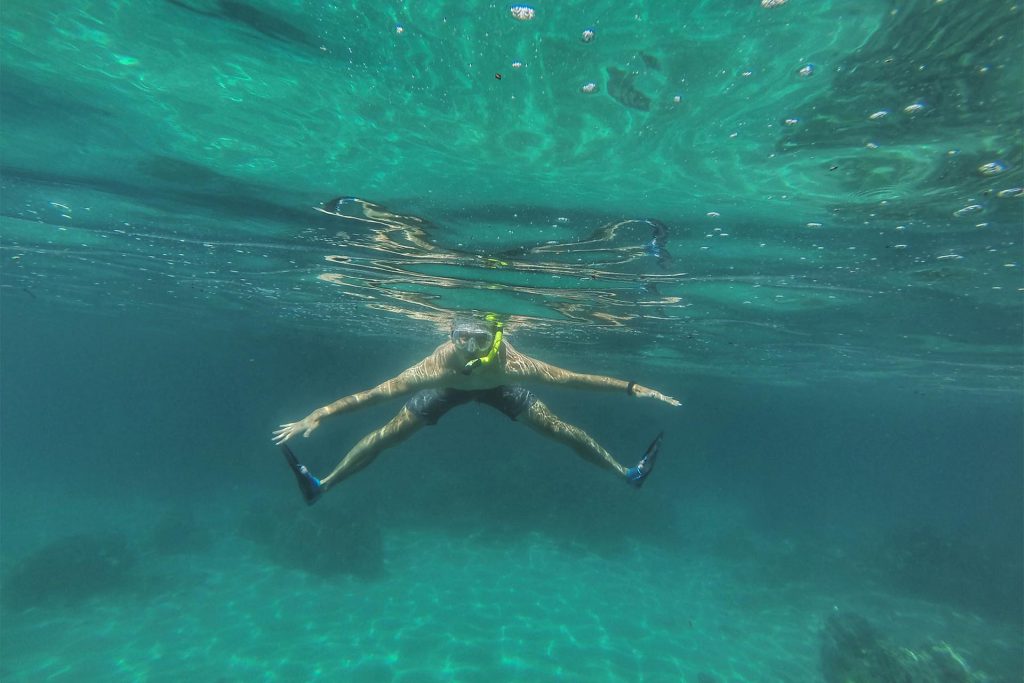 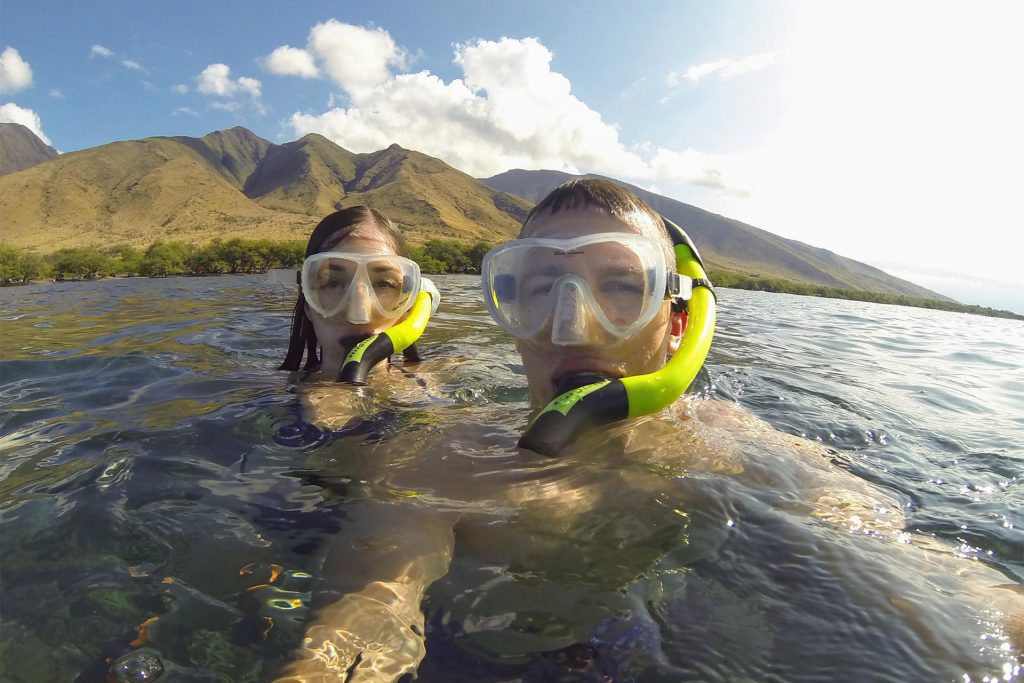 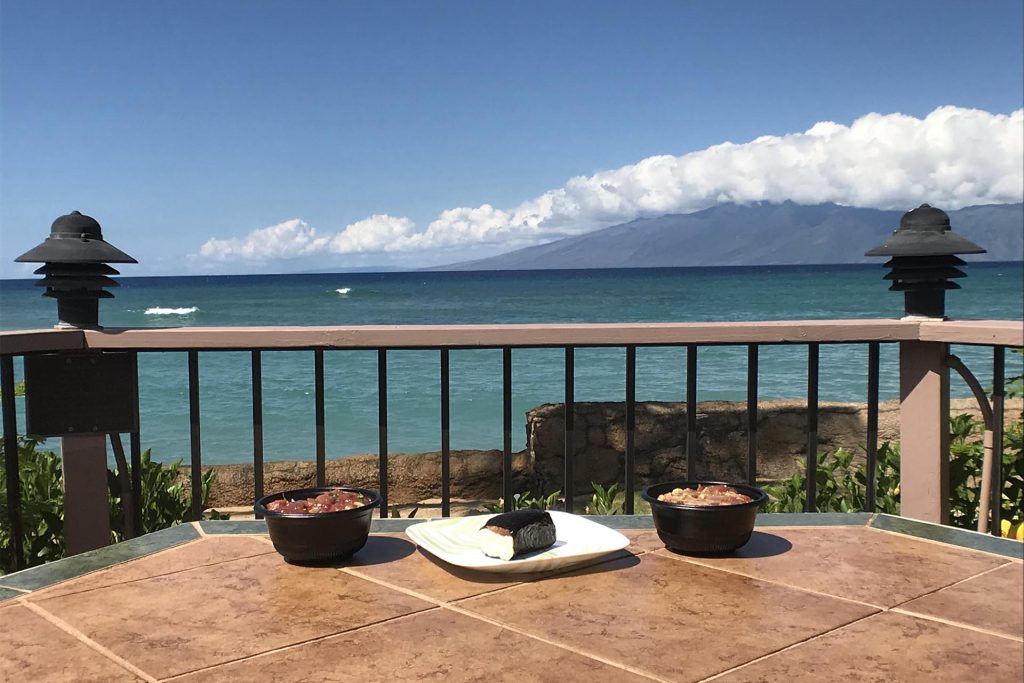 – The first condo we stayed at in Lahaina was unbelievable. We shelled out a bit more for that one since we considered it the start of our delayed honeymoon – and it was worth every penny. Our lanai (patio) was on the ocean, so we woke up to amazing views and fell asleep to the sound of the ocean. It was heaven.

– There are sea turtles everywhere in Maui. We literally saw at least one sea turtle every single time we went in the ocean. It was amazing. If you’ve ever been swimming alongside a sea turtle, you’ll understand what we mean when we say they’re mesmerizing.

– We were really excited to catch the sunrise at Haleakalā, especially since it shows up at the top of everyone’s Maui “must-do” list. One thing we didn’t expect though, was the unbelievable stargazing we would be able to do beforehand. It was breathtaking. Neither of us has ever seen that many stars or shooting stars in our lives. At over 10,000 feet elevation and with no light pollution, this is one of the best spots in the world to stargaze (little did we know). But WOW, getting up at 2 am to make the drive to the summit was absolutely worth it for the show we got. It was a night/morning we won’t be forgetting anytime soon. 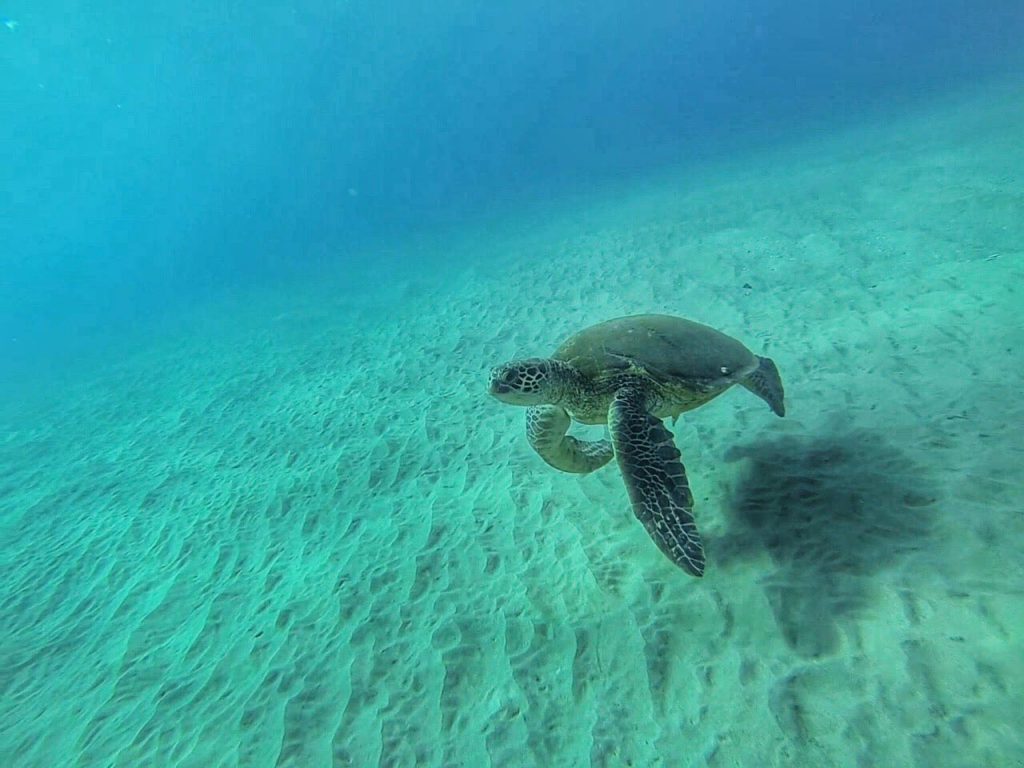 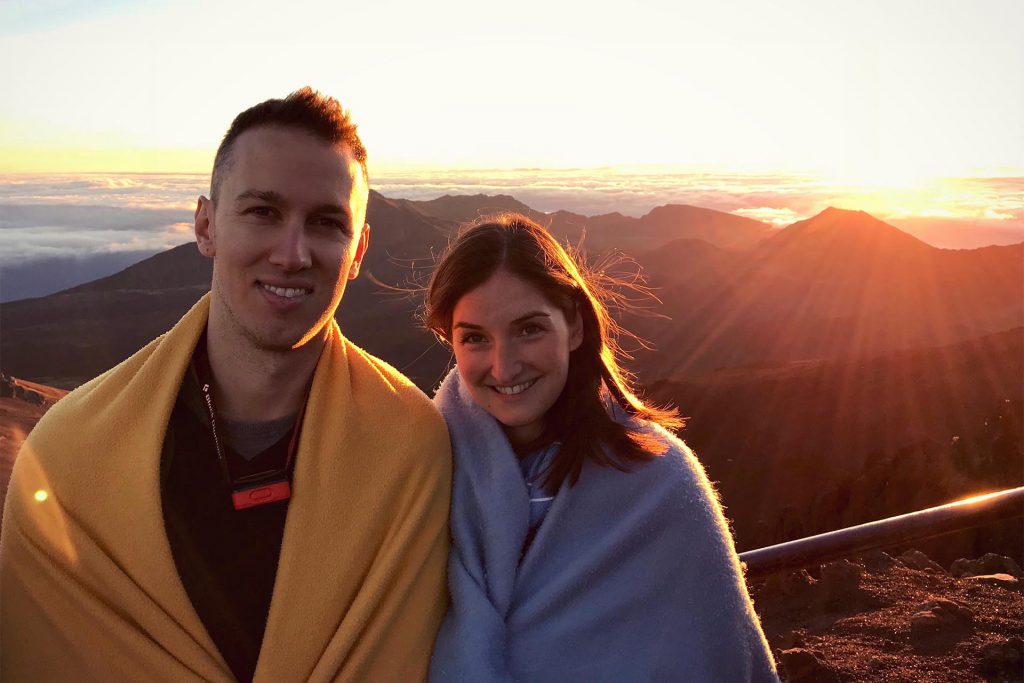 – The East Shore of Oahu is beautiful. There are so many dramatic views and cool hikes. Our favourite thing that we did on our road trip to the East and North Shore of Oahu was the Lanikai Pillboxes Hike. It was so scenic and the colour of the water in Lanikai is the most incredible shade of blue. Word of warning: it’ known as one of the easiest hikes on the island, and although in the end, it wasn’t bad, in the mid-day heat, and with a slight fear of heights, we did find it a little bit challenging. – We knew going into this that it was going to be tough – especially at first – to try to find a good balance between work and play. We were right. There have already been some very late nights and early mornings for both of us, but especially Dom. He even took a meeting on a rocky bay in snorkeling gear to make sure we are maximizing our time. Trying to stay connected to clients in the EST time zone will continually be a challenge but we’re looking forward to Australia where our nights will be East coaster’s mornings, making the overlap a bit easier on us. – It’s also been difficult trying to find time to write blog posts and to figure out how the whole thing works. We’re new to this, so deciding how often to post on social media and what to post about is all trial and error right now. I’ve been second-guessing my decisions a lot and have some insecurity around the blog and what we’re putting out there. We just keep trying to remind ourselves that we started this site so that we could share our experiences with the people we care about, and will hopefully be able to help inspire others to travel more or step outside their comfort zones. We’re trying to have fun with it and create a great keepsake for ourselves in the end as well.

– I’ve been trying to be mindful of my newfound food sensitivities and sticking to non-dairy/non-egg foods, but as someone who loves eating and trying local foods, I’ve been pretty unsuccessful so far. I really do try to avoid dairy and eggs when possible, or at least excess amounts of it, but it’s really hard to do that when you’re surrounded by so many exciting and new foods (and in some cases, familiar foods that you just want to eat to remind you of home). I’m usually a bit hard on myself after eating the foods I shouldn’t eat and feel guilty, but I’ve decided that as long as I’m avoiding dairy and eggs when I can, I’m okay with that for this trip. I have enzyme pills I can take when I know I’m going to be eating something I shouldn’t, and I continue to be mindful of how often and how much of it I’m eating so that I can keep my stomach feeling good as much as possible. – Our GoPro has been driving us a bit bonkers. We currently have a hero3, and it’s been shutting itself down at the most inopportune times – even after being charged all night – which has been extremely frustrating. It looks like it needs a replacement battery, but we haven’t been able to find one that will ship to our location, so we’ve decided to splurge on a newer model (the hero5) to make our lives easier. Especially since we plan on using it so much. Being able to see what we’re shooting as we’re shooting it will also be a big improvement!

– We’ve both had our moments with anxiety already, especially on travel days. We’re ironically both anxious travelers (why would we take a six-month trip, most might ask!?) which makes days that we have to fly on very stressful. The thing is, we love to explore and experience new things, so our passion for travel outweighs the anxiety that comes with it. Plus, once we arrive at our destination, check into our room and get settled, the anxiety is usually gone. But it can still be tough to deal with in the moment. My anxiety usually starts the night before we are scheduled to fly, ramping up until we’re sitting at our gate, and Dom’s tends to start as we arrive at the airport, and lasts until we land. I get impatient and angry when I’m anxious, and Dom gets quiet, so we’ve learned to read the signs and try to be very patient and supportive of each other when we’re in those states. – I have to admit, as excited as I was for us to get a drone for the great photos and videos, it has stressed me out from the start. I worry about it crashing (Dom has a story to tell about that one, which will be up on the blog soon), having it taken away from us for flying it in the wrong areas, or upsetting people around us (most of that is my anxiety talking). Luckily, I’m quickly getting more comfortable with it, and Dom’s becoming a really great drone pilot. It’s still a big learning curve though, and last week on the beach while we were trying to get drone footage, Dom’s phone battery died (which controls the drone) while it was flying 50 meters above the ocean. Panic ensued as you can imagine, and we were pretty certain we had lost the drone to the ocean a mere week into our trip. Luckily, being the smart drone that it is, it eventually started running out of battery too and thankfully returned itself to “home” (the spot we launched it from). Such a close call, and we now know to ALWAYS carry Dom’s phone charger and an external battery charger on us. – Honestly, we didn’t love every minute of Honolulu/Waikiki. Not to say that you wouldn’t love it, but things just didn’t go our way there (a lot of it was our fault, and some of it was not). I got really sick from food I ate (that didn’t appear to have any eggs or dairy in it, but who knows?); we only rented a car for our last day, and realized that we really needed a car every day (we mistakenly thought we could easily walk to more places); and we got up early to hike Diamond Head, which we were really excited about, only to find out when we got there that it was closed for a week with no apparent warning. So needless to say, we had a bad day or two, in part because we weren’t prepared enough, but we recognize that not every day can be great, and that’s okay. Oahu is a beautiful island though, with a ton of shopping, nightlife, and gorgeous beaches, so if you enjoy those things, it’s definitely worth checking out.

It’s been a busy first week and a bit for us and this still feels like a normal vacation. It’s crazy to think we still have another five-plus months of traveling ahead. We are doing our best to stay in the moment and to appreciate every second of this journey (the good and the bad). We truly feel so lucky and honestly have to keep pinching ourselves to make sure it’s not all a dream.

We’re going to do our best to “keep it real” in this journal section of Dtour. We will, of course, be posting some beautiful “polished” Instagram shots and stories about how much fun we’re having, but we’ll also continue to talk about any struggles or challenges we find along the way too. We hope you’ll come back to see what adventures lie ahead.